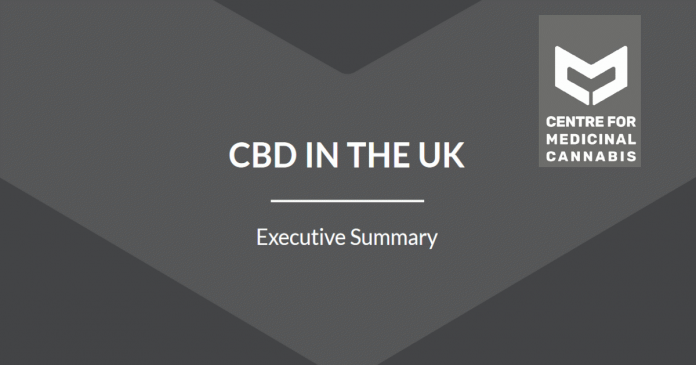 The UK’s Centre for Medicinal Cannabis (CMC) has revealed some disturbing results in its report on cannabidiol products sold in the nation.

Cannabidiol (CBD) use is growing in the UK. According to the CMC report, between 8- 11% of UK adults have tried CBD. The CMC says the UK CBD market is larger than the nation’s total Vitamin D and Vitamin C market combined, and states the current ‘hype’ around cannabidiol is not a passing fad – it is likely to endure.

Currently, UK hemp farmers are unable to service the market and all CBD source material sold in the UK is imported. With a plethora of imported products to choose from, quality has become a burning issue.

Another finding was 45% of tested products had measurable levels of THC or CBN, which makes them technically illegal in the UK. Contaminants such as Dichloromethane were detectable in 7 products and cyclohexane (1 product) at levels above food safety levels, but below pharmaceutical product daily dosage levels.

The CMC says the UK’s cannabidiol market is under-regulated, and related laws commonly misread – and this creates challenges for the industry and consumers.

“Despite its importance and therapeutic potential, and the scale of the British consumer’s appetite for cannabidiol, this report shows that we are some distance from the type of CBD sector that we need,” said Dr Andrew Yates, CMC Pharmacy Lead.

The wide- ranging report, CBD In The UK, covers issues relating to the law, regulations, the market, consumers, the industry and more. The executive summary can be downloaded here.

The CMC was launched as a not-for-profit industry body in December 2018. The Centre’s vision is that the UK should be “the home to the safest, most innovative, and best regulated medicinal cannabis market anywhere in the world”.

Previous articleIreland Pilot Medical Cannabis Program To Start This Year
Next articleOklahoma Medical Marijuana Program’s Stunning Statistics
Terry Lassitenaz
Terry Lassitenaz writes exclusively for Hemp Gazette and has done so since the site launched in 2015. He has a special interest in the political arena relating to medical cannabis, particularly in Australia, and addressing the many myths surrounding this incredibly useful plant. You can contact Terry here.
RELATED ARTICLES
News