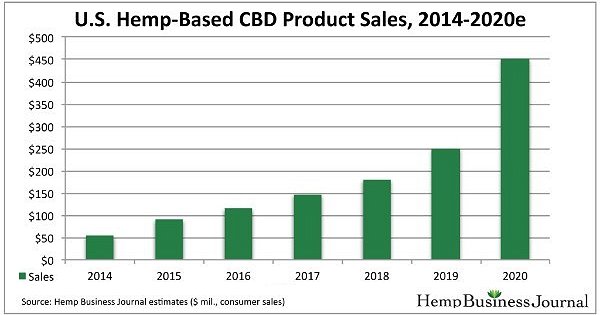 Hemp will play an increasingly important role as a source for cannabidiol (CBD) in the USA according to a new report from the Hemp Business Journal (HBJ).

The CBD Report states the cannabidiol market category will experience an incredible compound annual growth rate of 59%. Of the $2.1 billion in sales forecast in 2020, $450 million of those sales will be related to CBD extracted from hemp based sources rather than medicinal cannabis.

Even this year the hemp-derived CBD market is making its mark, predicted to grow to $115 million by the end of 2016 . It’s a big jump from just a few years ago when it was hardly a blip on the radar. Last year, consumer sales of CBD grew to $90 million.

In addition to hemp-based CBD products, the report estimates an additional $112 million in cannabis CBD products were sold via dispensaries last year, making for a total market value of $227 million in 2015. 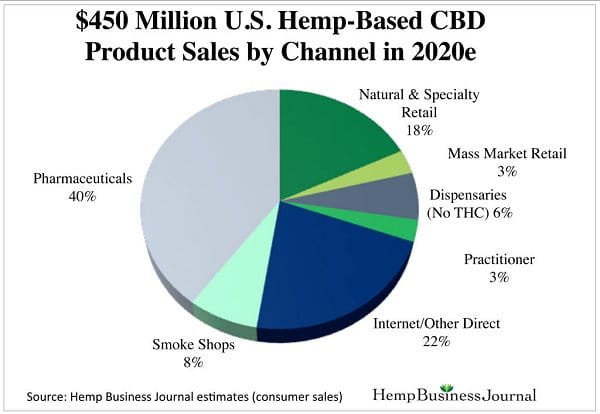 Driving the uptick in the market will be broader acceptance and accessibility in the USA, with half of U.S. states having legalized medical cannabis in some form by June this year. Others have joined since and nearly a dozen states will vote on cannabis laws in elections next month.

“2017 marks a tipping point in which a majority of U.S. states will transition from cannabis prohibition to some form of regulated legal market,” states HBJ.

It seems successful CBD vendors, those racking up the most sales, are pursuing a “natural” approach:

“As the world awakens to the benefits of consumer products made with phytocannabinoid hemp extracts rich in cannabidiol or CBD, traditional independent natural products retailers are seeing the most success as sellers of these products,” says the Journal.

With the sector coming under increased scrutiny, the Journal also advises manufacturers to create quality products that match marketing, to avoid making disease treatment claims and to observe laws closely.

It was perhaps some of the claims being made that recently contributed to a recent crackdown on CBD sales in the UK.

A sample from The CBD Report can be downloaded here (registration required).