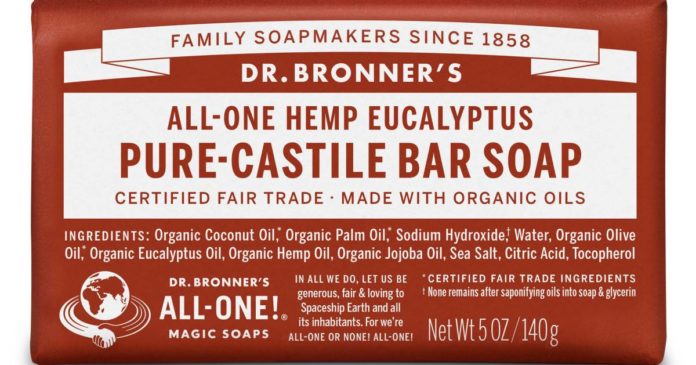 It’s not a piddling amount either – the company uses 30 tonnes of hemp seed oil annually for its range of soap and body care products.

Dr. Bronner’s originally started incorporating hemp seed oil back in 1999 and at that point, it was sourced from Canadian producers. It was a crazy situation – while hemp- based products could be sold in the USA, the crop couldn’t be grown there.

From 2000, the company started making financial and other contributions to efforts in legalising the crop in the USA. While growing hemp was finally made legal at a federal level with the signing of the 2018 Farm Bill, Dr. Bronner’s is continuing to advocate for cannabis.

“We will continue the fight to further dismantle unjust federal prohibition of cannabis cultivation in the U.S., so that the full healing potential of this plant is realized—for the sake of our health and the planet,” said David Bronner, who holds the unusual title of  “Cosmic Engagement Officer”, aka Chief Executive Officer (CEO) in other firms.

Some of the company’s actions in the past included co-ordination and funding the hemp industry’s legal battle against the DEA, which unsuccessfully attempted to prohibit hemp goods as Schedule I Controlled Substances.

Another action was a little outside the box, or more accurately, inside it. In 2012 David Bronner locked himself in a steel cage along with live hemp plants in front of the White House, then harvested the seeds and extracted oil while explaining his actions to those who gathered. After the police and fire department police used a power saw to cut open the door, he was arrested and charged with possession of marijuana and blocking passage.

The company says it has donated $3.6 million to hemp legalization efforts over the past two decades. And as it turns out it was money well spent, with products made with U.S. hemp now appearing everywhere and already it’s hard to believe there was ever a time they weren’t.

“Bringing hemp back to the American agricultural landscape is a big win for farmers, consumers, environmentalists and sustainable manufacturers alike, and we’re proud to support the growing U.S. hemp industry with our dedicated business,” says Mr. Bronner.