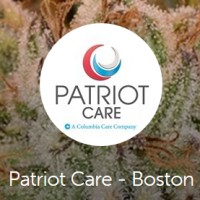 “Being the first dispensary permitted to open in the City of Boston is a privilege for every member of our local and national organization,” said Columbia Care CEO Nicholas Vita.

“Our mission of improving lives is at the core of everything we do. Expanding access to this natural medicine will have the potential to improve the lives of thousands of patients and their families.”

The dispensary is one of what will be no more than 35 licensed retail facilities in the state. Including Patriot Care, it appears there are seven dispensaries now operating in Massachusetts.

Patriot Care says it will also provide a delivery service  once initial patient registration and consultation have been completed on site.

To access cannabis medicines, or even to walk into such a facility in Massachusetts, patients must be signed off by a certified physician and registered with the state’s Department of Public Health. There are approximately 23,000 registered patients in the state.

Registered patients and their caregivers are still able to cultivate marijuana, but only if they are unable to access a dispensary or if financial hardship can be verified. If cannabis is obtained for non-medical purposes, offenders can face more than 2 years in jail.

A medical marijuana law was originally passed in 1998 in Massachusetts, but it was never implemented.  It wasn’t until ballot initiative Question 3 passed in 2012 was it legalized.

The state’s first Certificate of Registration to operate a Registered Marijuana Dispensary (RMD) was in January last year to Alternative Therapies Group, which established a facility in Salem.

Last week, the Massachusetts secretary of state approved a November ballot measure to completely legalize adult use and retail sale of marijuana in the state.

Previous articleMedicinal Cannabis Scheme For The ACT
Next articlePain Patients In Minnesota Gain Medical Marijuana Access
Terry Lassitenaz
Terry Lassitenaz writes exclusively for Hemp Gazette and has done so since the site launched in 2015. He has a special interest in the political arena relating to medical cannabis, particularly in Australia, and addressing the many myths surrounding this incredibly useful plant. You can contact Terry here.
RELATED ARTICLES
News