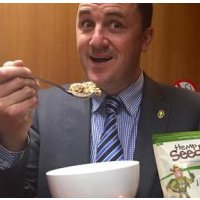 Australia and New Zealand have the unfortunate distinction of being the only countries in the world where the sale of hemp food is still illegal.

It’s a really strange situation in the land down under.

Hemp-based foods are primarily associated with the seed; which have been consumed by humanity for thousands of years. Hempseed has very low levels of the psychoactive compound THC ( tetrahydrocannabinol); so little that it’s impossible to get a high from eating them.

“It is very rich in essential fatty acids (EFAs) and other polyunsaturated fatty acids (PUFAs). It has almost as much protein as soybean and is also rich in Vitamin E and minerals such as phosphorus, potassium, sodium, magnesium, sulfur, calcium, iron, and zinc,” states a 2010 paper published in the journal Biomed Central.

” Hempseed oil contains all of the essential amino acids and also contains surprisingly high levels of the amino acid arginine.”

Battling the hemp food ban has been going on in Australia in earnest for well over a decade – and a little more positive progress was made today.

The state of New South Wales’ Legislative Council voted 17-16 to adopt a motion calling on the state’s Government to work with other Australian governments in lifting the ban on hemp food products.

“For years now Australia and New Zealand Ministerial Forum on Food Regulation has delayed making a decision on legalising hemp foods by commissioning endless reports and reviews. 2016 should be the year that a decision is finally made.”

While the Government opposed the motion, it was supported by the Greens, Labor and CDP MPs.

Other recent progress was in November last year, when a meeting of Australian and New Zealand health ministers sought to accelerate working towards lifting the ban.

The ban situation is even more curious considering seeds from the opium poppy are freely available as a food in Australia.

The industrial hemp plant, from which hemp seeds are sourced, is also grown differently and looks very different to the cannabis strains used for medical marijuana that have high levels of THC.

Perhaps this may be the year that sanity prevails and Australians can start reaping the rewards – financial, environmental and health-related – that hemp foods will bring to the country.

Previous articleAustralia’s Medical Marijuana Legislation – Reactions
Next articleAustralian Medical Cannabis And Hemp News Roundup
Gillian Jalimnson
Gillian Jalimnson is one of Hemp Gazette's staff writers and has been with us since we kicked off in 2015. Gillian sees massive potential for cannabis in areas of health, energy, building and personal care products and is intrigued by the potential for cannabidiol (CBD) as an alternative to conventional treatments. You can contact Gillian here.
RELATED ARTICLES
News