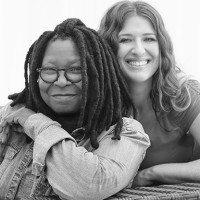 Whoopi And Maya launched earlier this week to much media fanfare.

The products currently available – a tincture, a balm, sipping chocolate and a bath soak – contain tetrahydrocannibinol (THC),  THC and cannabidiol (CBD), or just CBD. While THC can have an intoxicating effect, it also has analgesic properties. CBD has the latter.

“You can put the rub on your lower stomach and lower back at work, and then when you get home you can get in the tub for a soak or make tea, and it allows you to continue to work throughout the day,” said Ms. Goldberg in a Vanity Fair interview.

Ms. Goldberg has used marijuana to manage menstrual pain and glaucoma headaches. She says she thought carefully before lending her name to the venture.

“This is a nice quiet way that I can be part of this,” Goldberg said. “It had to help people if I were going to be involved.”

Currently, the products are only available in California to people with medical marijuana cards.

California’s Legislature passed and the state’s Governor signed into law three bills that created a licensing and regulatory framework for medical marijuana in 2015.

Whoopi Goldberg joins a steadily growing list of celebrities jumping on the medical cannabis bandwagon; with the ranks including Snoop Dogg, Willie Nelson and Woody Harrelson.

Closer to home, controversial character Kyle Sandilands has also expressed an interest in starting a medical marijuana company – but whether that was said with tongue-in-cheek is hard to tell.

Any list would be incomplete without including Thomas Chong; one of medical marijuana’s longest standing celebrity supporters.

Previous articleStrong Support For Medical Cannabis In New Zealand
Next articleLifting Of AU/NZ Hemp Food Ban Inches Closer
Gillian Jalimnson
Gillian Jalimnson is one of Hemp Gazette's staff writers and has been with us since we kicked off in 2015. Gillian sees massive potential for cannabis in areas of health, energy, building and personal care products and is intrigued by the potential for cannabidiol (CBD) as an alternative to conventional treatments. You can contact Gillian here.
RELATED ARTICLES
News