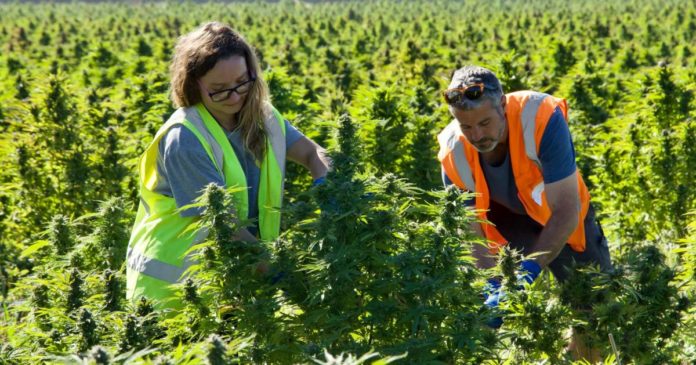 It was all hands on deck at Puro’s Kēkerengū facility from mid-April as its team put in long hours to get the crop picked, dried and packaged. The team’s efforts and favourable weather combined to enable around 2 tonnes of flower and other biomass to be harvested a day.

Last Wednesday, the company reported the harvest was wrapping up, with tens of thousands of plants processed.

“We showed heaps of maia (courage) – with big days and long nights – and are extremely proud of the tenacity shown in completing our 2021/22 harvest!”

According to Stuff.co.nz, around 50,000 plants were harvested during the past four weeks; weighing close to 30 tonnes. A small portion of this biomass will wind up in Australia, with a trial shipment of just under 150kg of starting material heading our way.

One of the interesting aspects of Puro’s crop is it was organically grown. The company gained certified organic status for its outdoor cultivation site at Kēkerengū on the Kaikōura Coast late last year.

The company has had much to celebrate in recent times. Another significant recent achievement was a NZD $13 million government grant to go towards “turbocharging” the country’s local medical cannabis industry.

There are many New Zealanders keen on keeping track of Puro’s progress. Founded in 2018, the company carried out a successful crowdfunding campaign in 2019, with strong local support. In August 2020, New Zealand’s Ministry of Health granted Puro licences required to import cannabis seed and start commercial cannabis cultivation at Kēkerengu, and also its Waihopai site

A dark cloud to recently cast a shadow on the company has been an issue beyond its control – the emergence of a fake Facebook page posing as Puro that tricked people into sending money for purchasing medical cannabis. The company was working with authorities to have the fake page removed and the offenders identified.

Previous articleStudy Suggests Cannabis Flower Effective For Fatigue Treatment
Next articleStudy Finds Hemp Extract Delays Ageing Process In Honey Bees
Gillian Jalimnson
Gillian Jalimnson is one of Hemp Gazette's staff writers and has been with us since we kicked off in 2015. Gillian sees massive potential for cannabis in areas of health, energy, building and personal care products and is intrigued by the potential for cannabidiol (CBD) as an alternative to conventional treatments. You can contact Gillian here.
RELATED ARTICLES
News