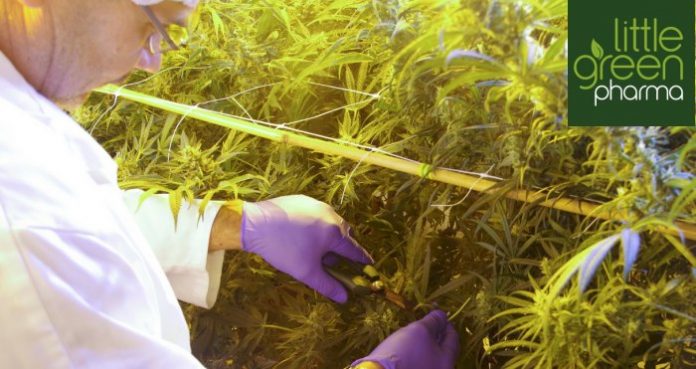 Perth’s Little Green Pharma has harvested what it says is the first crop of commercial-use medical cannabis grown in Australia, and the first legally-grown cannabis in the state of Western Australia.

It was back in late December last year the privately-held company announced it was commencing cultivation at its super-secret facility south of the city. The company has been very quiet since that time, but judging by the following image, they’ve been busy and the hard work has paid off. Flower from the crop will now be dried before a resin sample is extracted and then sent off to an approved certified laboratory to test for purity and quality. According to the company, the strain they’ve cultivated is low in tetrahydrocannabinol (THC), but high in cannabidiol (CBD).

In addition to cultivation activities, Little Green Pharma Managing Director Fleta Solomon said the company’s directors had also been busy on a fact-finding mission seeking out best practices in Israel, Canada and the USA.

“Little Green Pharma’s long-term aim is to build a world class facility on our doorstep right here in WA,” stated Ms. Solomon. “With the advantage we have of being the first mover in Australia combined with the Australian Government’s vision of our nation being the world’s premier exporter of high grade medicinal cannabis and the growing number of countries legalising it, we believe it is the perfect time to expand our operations.”

The company says it has advanced technology for producing medical cannabis for oral administration, but isn’t letting on what it is. Little Green Pharma states its manufacturing process preserves the full cannabinoid profile present in the source plant

Actually, it doesn’t reveal a lot about a lot on its web site. However, unlike the hype that surrounds companies participating in this nascent industry in Australia, it appears Little Green Pharma is a quiet achiever. It’s one of the advantages of being a private entity that doesn’t have to satisfy shareholders’ sometimes insatiable need for news of progress.

Little Green Pharma certainly appears to have attracted significant talent to its management team, general advisory board and medical/scientific advisory board.

The company was granted a licence by the federal Office of Drug Control (ODC) to cultivate and produce medical cannabis for Australian patients from the beginning of June last year.

Previous articleU.S. Senate Minority Leader Backs Hemp Farming Act of 2018
Next articleApplications Open For South Carolina 2019 Hemp Growing Season
Gillian Jalimnson
Gillian Jalimnson is one of Hemp Gazette's staff writers and has been with us since we kicked off in 2015. Gillian sees massive potential for cannabis in areas of health, energy, building and personal care products and is intrigued by the potential for cannabidiol (CBD) as an alternative to conventional treatments. You can contact Gillian here.
RELATED ARTICLES
News