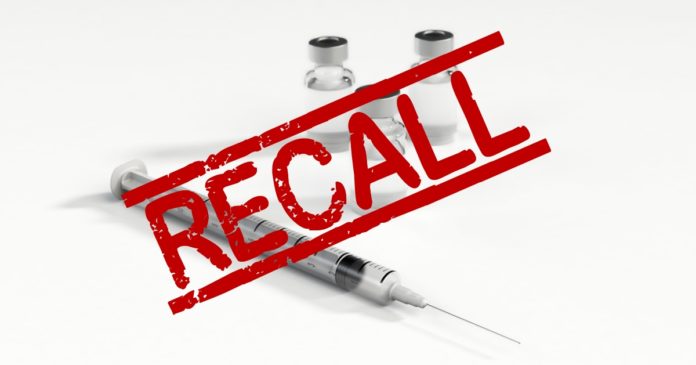 Injectable CBD? It seems like it’s a thing – and that’s rather concerning when these products don’t have the appropriate approvals.

A U.S. company is voluntarily recalling injectable products containing cannabidiol as they were marketed without FDA approval and the product claims on its website meant these products were unapproved new drugs.

In an announcement from the company published on the U.S. FDA web site, it notes:

“Unapproved new drugs injected into the bloodstream for which safety and efficacy have not been established could pose a serious risk of harm to users because they bypass many of the body’s natural defenses against toxic ingredients, toxins, or dangerous organisms that can lead to serious and life-threatening conditions such as septicemia or sepsis.”

The company advises practitioners or consumers that have products being recalled to stop using them and return the products to the place of purchase.

The recall follows a warning letter from the FDA sent in April, which outlines a number of concerns. Among them, the FDA took issue with the unapproved products as they were intended for use in the diagnosis, cure, mitigation, treatment, or prevention of disease, and/or intended to affect the structure or any function of the body. In the FDA’s warning letter, it includes some of the claims made on the website.

While CBD shows a lot of promise, vendors need to be particularly careful in how the market it – and as for an injectable product; that’s another issue altogether. A quick dig around using some Google tools shows people are actually searching for this form of CBD. It’s a worry, but thankfully the level of queries seems very low and here’s hoping it remains that way.

Unlike other forms of cannabidiol ingestion; there appears to be very little peer reviewed literature about regarding injecting solutions containing CBD into humans. People shouldn’t be making themselves guinea pigs for this practice outside of formal clinical trials – and definitely not injecting cannabis/CBD oil developed for oral ingestion under any circumstances.

The advice is as always – speak with a medical professional before embarking on any treatment.