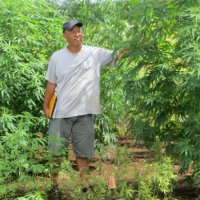 A study by University of Hawai‘i College of Tropical Agriculture and Human Resources suggests more than 70 tons of industrial hemp could be produced per acre each year in the state.

The stalks could be used to produce items such as hempcrete; a building material with good insulation qualities and just a fraction of the weight of concrete.

Dried stems and leaves can be used for animal forage. Apparently, the meat produced by livestock feeding on industrial hemp is more nutritious than corn fed beef.

The subtropical seed hemp cultivar trialed during the study would be able to produce 2 crops a year, with a yield of around 2.5 tons of seed per acre per year.  Hemp seed is used for human food and in the production of personal care products.

While the subtropical fiber hemp grew at a very rapid rate –  mean of 1.9 m in 15 weeks – it was a real water-miser; requiring only 10 mm of water per week.

Temperate zone hemp was also trialed, but only grew to a height of about 2 feet before flowering and then dying.

The University’s research project has certainly been successful, but the report lamented some of the hoops the team had to jump through to perform the feasibility study.

“It is unclear why industrial hemp is classified as a drug. It took 11 months between starting the process to import hemp seeds for growth trials until the seeds arrived,” said Maria Gallo, author of the report and Dean of the College of Tropical Agriculture and Human Resources.

“There is significant potential for a successful hemp agricultural industry in Hawai‘i based on the preliminary findings of the 2015 Industrial Hemp Research Project,” states Dean Gallo.

The report can be viewed in full here (PDF).

On a related topic, recently we reported on a push to commence legal industrial hemp cultivation in Maui; which is part of the Hawaiian island chain.

Previous articleIsrael To Ease Up On Medicinal Cannabis Regulation
Next articleNSW Medical Cannabis Access Scheme To Start Soon
Gillian Jalimnson
Gillian Jalimnson is one of Hemp Gazette's staff writers and has been with us since we kicked off in 2015. Gillian sees massive potential for cannabis in areas of health, energy, building and personal care products and is intrigued by the potential for cannabidiol (CBD) as an alternative to conventional treatments. You can contact Gillian here.
RELATED ARTICLES
News