HomeNewsFDA Seeking Cannabidiol Feedback For WHO

FDA Seeking Cannabidiol Feedback For WHO 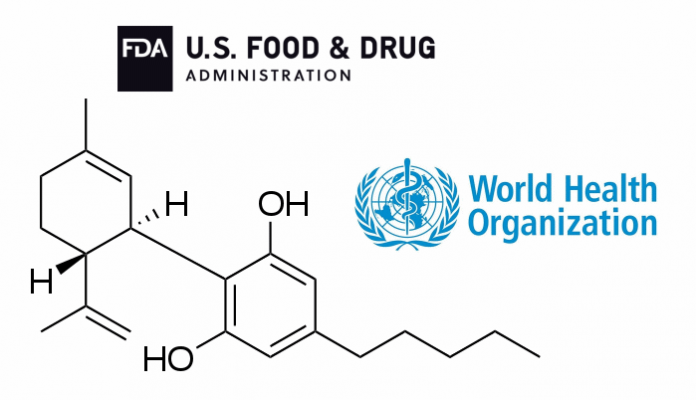 The USA’s Food and Drug Administration is asking for feedback on cannabidiol in response to a request from the World Health Organisation for information.

At the 37th meeting of the Expert Committee on Drug Dependence (ECDD), the World Health Organisation requested the Secretariat prepare relevant documentation to conduct pre-reviews for a number of substances, including the non-psychotropic cannabinoid cannabidiol (CBD). This information is to be part of a process to determine if the compounds in question should be subject to international restrictions under the 1971 Convention on Psychotropic Substances.

While THC (tetrahydrocannabinol) is listed in Schedule 1 of the Convention, cannabidiol doesn’t appear in the document.

On behalf of the U.S. Department of Health and Human Services (HHS), the FDA has called for comments from all interested parties with regard to the beneficial properties, potential for abuse, trafficking issues, and impact of scheduling changes on availability for the medical use of cannabidiol and 16 other substances. These comments will be considered in preparing a response from the U.S. to WHO.

Full details regarding the request and instruction for submitting comments can be viewed here. Comments must be submitted by September 13.

“CBD has been shown to be beneficial in experimental models of several neurological disorders, including those of seizure and epilepsy. In the United States, CBD-containing products are in human clinical testing in three therapeutic areas, but no such products are approved by FDA for marketing for medical purposes in the United States.”

CBD is thought to have potential in treating or relieving a wide range of conditions; including anxiety, some forms of cancer, depression, inflammation, multiple sclerosis, and post-traumatic stress disorder (PTSD). It’s been shown to be well-tolerated and seems to produce fewer side effects and complications compared to the medications it could replace. The fact that the FDA used the term “beneficial” in the same sentence as CBD has some medical cannabis supporters quite excited.

However, the potential for cannabidiol to be listed under the Convention on Psychotropic Substances is a little unsettling, particularly given CBD is not generally considered a psychotropic compound.

The FDA/HHS says it will not make any specific recommendations concerning cannabidiol through this exercise, but will defer to WHO; which is expected to make official recommendations to the Commission on Narcotic Drugs early next year.

Trivia: On a somewhat related note, some say the UN Single Convention on Narcotic Drugs of 1961 bans cannabis. However, what it actually states is: “The use of cannabis for other than medical and scientific purposes must be discontinued.”