Another Important Step Towards The USA’s New Industrial Hemp Revolution 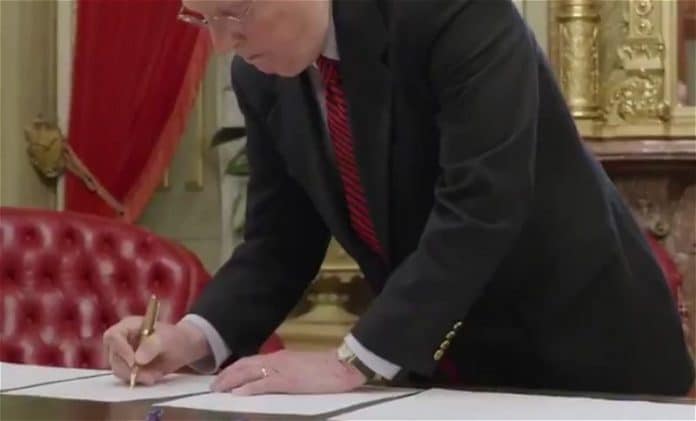 The U.S. Senate has given its nod to the 2018 Farm Bill, which includes a provision for legalising industrial hemp at a federal level.

The Bill is headed to President Trump’s desk for his approval, which is quite probable – although one can never be quite sure with Mr. Trump. Vote Hemp expects the bill to pass and be signed by the president within a matter of days.

“At a time when farm income is down and growers are struggling, industrial hemp is a bright spot of agriculture’s future,” said  Senator McConnell yesterday. “My provision in the Farm Bill will not only legalize domestic hemp, but it will also allow state departments of agriculture to be responsible for its oversight.”

Quite fittingly, Senator McConnell signed the Farm Bill with a hemp pen (pictured above). He has offered the use of his pen to President Trump.

Under the Act, hemp is defined as:

“.. the plant Cannabis sativa L. and any part of that plant, including the seeds thereof and all derivatives, extracts, cannabinoids, isomers, acids, salts, and salts of isomers, whether growing or not, with a delta-9 tetrahydrocannabinol concentration of not more than 0.3 percent on a dry weight basis.”

House and Senate agriculture leaders reached agreement in principle on the 2018 Farm Bill in late November. Should it be signed into law before the end of this year, it will go into effect from January 1, 2019 – but it will take time for implementation.

Up to this point, industrial hemp has been grown legally in the country, but under very strict conditions.  Under a previous Farm Bill only institutions of higher education or state departments of agriculture could grow the crop, although some contracted out this work.

It’s expected the passing of the legislation will not only open the floodgates on locally grown hemp fibre and food items, but also sales of cannabidiol products using CBD derived from hemp grown in the USA. However, it’s been pointed out the Food & Drug Administration (FDA) maintains products containing cannabidiol cannot be sold as dietary supplements or be added to food.