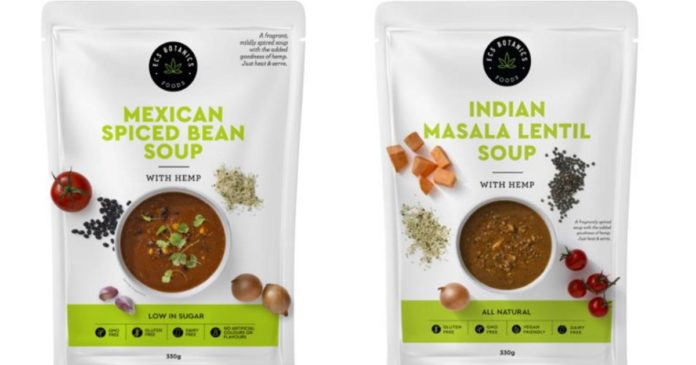 The distribution partner of Australia’s ECS Botanics (ASX:ECS) has inked a deal with Woolworths that will see a couple of ECS soups containing hemp stocked on Woolies’ shelves.

The two soups are ECS’s Mexican Spiced Bean Soup with Hemp and Indian Masala Lentil Soup with Hemp, which will be stocked in Woolworths stores via Just Foods Australia;  which is a distributor of health, pharmacy and hardware products throughout the country.

The deal follows another announced in in November last year where ECS Botanics’ 250ml hemp oil product will be stocked in 850 Australian Woolworths stores, also via Just Foods Australia. At that point, the first order was expected to have been (or will be) dispatched this month.

Other products in the ECS retail range include oil capsules, hemp heart pouches, curry sauces, protein and protein mix. “Hemp hearts” consist of the edible interior of the seed – in other words, hulled hemp seeds.

ECS Botanics cultivates and processes hemp in addition to manufacturing food products based on the seed. Its main operations are conducted in Tasmania where it has licences to cultivate, supply and manufacture. As well as cultivating its own crops for hemp seed, ECS also sources seed from other suppliers based in Tasmania.

The island state of Tasmania is currently Australia’s premier hemp hub, both in terms of hectares under cultivation and yield per hectare. It also has a “clean and green” image nationally and internationally, which is very helpful to companies manufacturing wellness related products.

As well as its Tasmanian hemp operations, ECS holds a grower licence in Queensland, plus a Federal Office of Drug Control-issued import and export licences and medical cannabis cultivation and manufacture licences.The cultivation licence was granted by the ODC in December last year for a production facility at a site near ECS’s hub in Tasmania. The manufacturing licence was awarded a month earlier, in November 2019.

ECS was founded by Alex Keach and incorporated in February 2018.

“While the success we’ve achieved in the short term is pleasing, most importantly we are setting the foundation and capability to leverage the first mover opportunity in an exciting, high growth and evolving industry,” said Mr. Keach.

Previous article
South Dakota Governor Signals Potential Hemp Support, But..
Next article
GW Pharmaceuticals Turning Big Bucks From CBD
Gillian Jalimnson
Gillian Jalimnson is one of Hemp Gazette's staff writers and has been with us since we kicked off in 2015. Gillian sees massive potential for cannabis in areas of health, energy, building and personal care products and is intrigued by the potential for cannabidiol (CBD) as an alternative to conventional treatments. You can contact Gillian here.
RELATED ARTICLES
News