From Cucumbers To Medical Cannabis In Australia 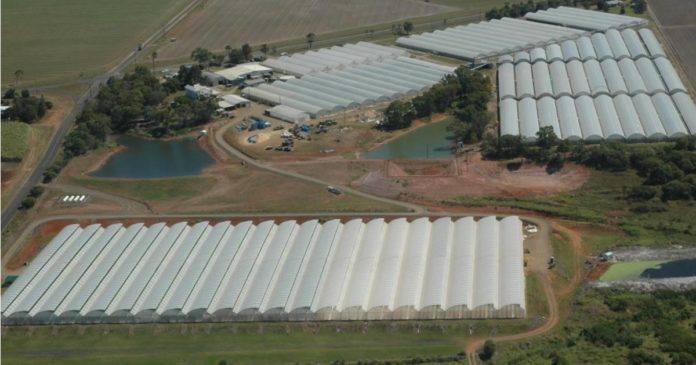 Australia’s THC Global (ASX:THC) hopes to soon be cultivating cannabis in greenhouses previously used to grow cucumbers at a site near Bundaberg in Queensland.

Last Friday THC Global announced it had secured 6.6 hectares of existing hydroponic greenhouses (pictured above) that, subject to licencing, will be repurposed for cannabis cultivation. The company has also secured an additional 18 hectares of agricultural land for a proposed open-field cannabis cultivation venture, which is part of the same site.

The site is owned by Eden Farms, which was (and may still currently be) growing continental cucumbers at the property using a hydroponics process.

The terms of the lease for the property will be settled in tandem with an application to Australia’s Office of Drug Control for a licence to undertake cannabis cultivation at the site.

Assuming a green light is given, initial production from the greenhouse component is expected to be 80 tonnes of dried cannabis flower a year. The facility could be a primary supplier of medicinal cannabis flower to THC Global’s Southport (Queensland) Facility as early as next year.

The Southport facility was recently officially opened by Australia’s Federal Minister for Health, Greg Hunt. It has an expected production capacity of 12,000 kg of Active Pharmaceutical Ingredient  extracts annually and these extracts may be further processed into finished medicines at the plant, pending appropriate licensing being granted.

As for the 18 hectares of agricultural land at the Bundaberg site, THC Global is considering using this for hemp cultivation; enabling the firm to enter food and nutraceutical markets.

“With this facility now secured, we will commence the process of submitting an application to the Office of Drug Control for this facility to come under our existing cultivation licences and permits, allowing for a rapid approval process compared to that of a new first-time applicant for a cultivation licence,” said THC Global Chief Executive Officer, Ken Charteris.

The company says is it ready to start greenhouse cultivation almost immediately after licenses and permits are granted.

Previous articleUSA 2019 Hemp Season A Stunner
Next articleSouth Dakota Governor Under Fire For Hemp “Lies”
Gillian Jalimnson
Gillian Jalimnson is one of Hemp Gazette's staff writers and has been with us since we kicked off in 2015. Gillian sees massive potential for cannabis in areas of health, energy, building and personal care products and is intrigued by the potential for cannabidiol (CBD) as an alternative to conventional treatments. You can contact Gillian here.
RELATED ARTICLES
News