Hemp seed certification is more than just a marketing label – it is a very big deal.

In order for industrial hemp to be legally grown in some countries, it must have a very low THC (tetrahydrocannabinol) level – usually around 0.3 percent dry weight. If seeds grow into plants with levels above the maximum, the crop is considered to be marijuana and may need to be destroyed; resulting in a significant loss for the farmer – and potential legal action.

Colorado’s certified hemp seeds, while they will be more expensive, will help farmers avoid this risk.

There was a small amount of hemp seed being produced in Colorado since the passage of the Colorado Industrial Hemp Act in 2013; but quality and THC levels of the seed varied wildly.

The certified seed varieties were developed through a partnership with the Colorado Department of Agriculture and Colorado State University. The strains have been developed to thrive in high-altitude conditions; so they may not be suitable for other regions.

Industrial hemp is becoming big business in the state. During 2016 so far, Colorado has grown more hemp than all the other US states combined and the state is home to the nation’s largest hemp farm. 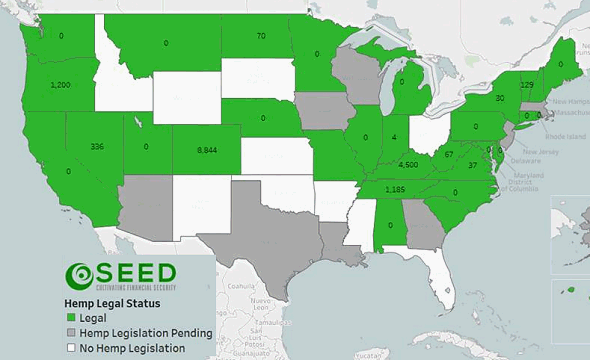 While hemp has been legal to grow in Colorado for some time, the seeds could only be imported for research; so farmers have been growing crops just to amass a stock of seeds. As to how the original seed was sourced; it appears some of it may have been left over from the 1950’s, before industrial hemp was outlawed in the state.

Farmers will be able to buy the newly certified seeds starting next year.

Colorado has been very progressive on all things marijuana related. It was back in November 2000 when a majority of the state’s voters approved the use of marijuana by patients with written medical consent. Patients are also permitted to grow up to six marijuana plants. The number of registered medical cannabis patients in the state is an estimated 102,283 adults and 337 minors.

Previous articleMinnesota Medical Marijuana Program Popular With Pain Patients
Next articleHemp Home Featured On Sustainable House Day
Gillian Jalimnson
Gillian Jalimnson is one of Hemp Gazette's staff writers and has been with us since we kicked off in 2015. Gillian sees massive potential for cannabis in areas of health, energy, building and personal care products and is intrigued by the potential for cannabidiol (CBD) as an alternative to conventional treatments. You can contact Gillian here.
RELATED ARTICLES
News