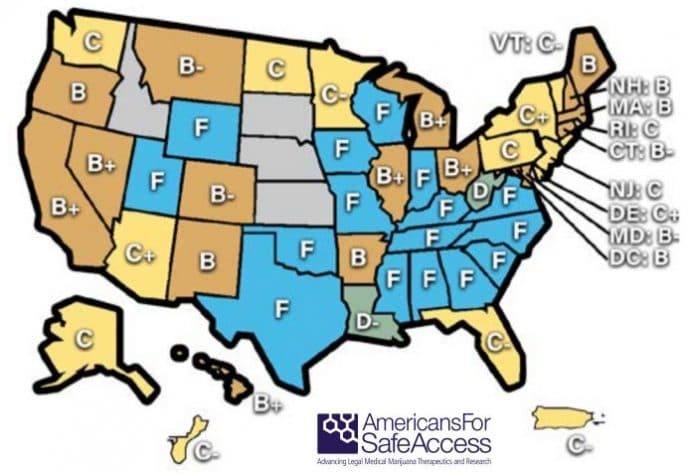 46 U.S. states and three territories now have medical cannabis laws – and they vary greatly. In what must have been a monumental effort, Americans for Safe Access recently graded them all on a 500-point scale.

The states and territories were graded on five general categories, each worth 100 points:

Criteria for scoring was based on a series of more than 100 public meetings across the U.S. as well as surveys of ASA’s 100,000+ members.

“We want lawmakers to use this report to see that there are gaps in their medical cannabis programs,” said Steph Sherer, Executive Director for Americans for Safe Access. “Even programs that have been around for decades like California still have room for improvement.”

The report,  “Medical Marijuana Access in the United States: A Patient-Focused Analysis of the Patchwork of State Laws”, is a interesting read, but it should be kept in mind grading has been based on laws passed and regulations put into effect between January 1, 2017 and December 31, 2017. As you’ve probably seen here on HempGazette, further progress has been or is in the process of being made in various U.S. states so far during 2018.

ASA acknowledges this, stating “we expect that some of this information will be out of date as soon as ink hits paper”.

The report can be downloaded here (PDF). One of the very useful aspects of the document is an at-a-glance table indicating all the qualifying conditions for programs in all states with medical cannabis laws.

Next year’s report will contain a new category, “Opioid Response”.

While medical cannabis access has a long way to go in the USA – just as it has in many other countries – ASA is generally upbeat about the direction and progress seen in 2017.

“Despite every program needing improvements, and worrisome actions by the Justice Department, medical cannabis access is the strongest it has ever been,” says the organisation.