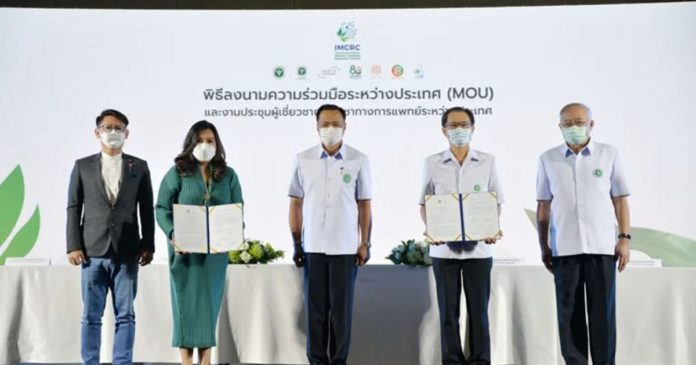 Thailand has taken another step forward in embracing medicinal cannabis with an agreement signed for a new research centre.

A memorandum of understanding between the country’s Public Health Ministry and a subsidiary of Amara Asia, RxLeaf World Medica, has been signed for establishing what’s been dubbed the International Medical Cannabis Research Center.

The Center will bring together doctors, researchers and other experts – both local and from overseas – to engage in research and product development while exchanging knowledge. The facility will promote leading scientific research on medical cannabis genetics, cultivation, extraction, formulations and production of cannabis, and in combination with various Thai herbs.

Deputy Prime Minister of Thailand and Minister of Public Health Anutin Charnvirakul said Thailand had been hit hard by the economic effects of the pandemic. It’s hoped the Center will be one of the catalysts to support the country’s economic recovery.

“The medical industry is a key prospect for economic reform due to its global valuation at US$8.3 trillion, while the legalized cannabis market is at approximately US$12.5 billion,” said a release from Amara Asia. “Therefore, this is a tremendous opportunity for the country as Thailand has both the personnel and physical capability and potential to accept this challenge.”

While there’s not a lot of information about regarding RxLeaf World Medica aside from that it is dedicated to the research and development of medical cannabis and nutritional products, another Amara subsidiary has a greenhouse located in Buriram in the eastern part of Thailand. The Buriram operation supplies plant material, extracts and medical products to government institutions and hospitals, and has a quota of more than 70,000 marijuana plants per year. Amara claims to have been the first company to introduce solvent-free extraction (SFE) to Thailand.

The Board of the new Center is extensive, with 22 directors – many of whom are also directors of various hospitals across Thailand.

The possession, sale, and use of cannabis was criminalised in Thailand by the Cannabis Act in 1935; but in 2018, Thailand became the first East Asian nation to legalize medical marijuana.