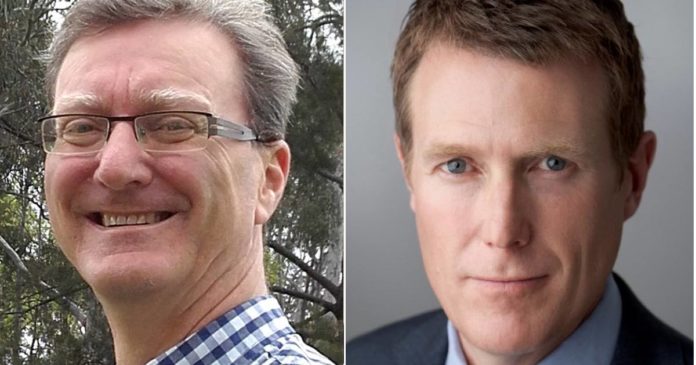 The Federal and ACT Attorney-Generals are continuing to duel over the Australian Capital Territory’s new cannabis laws.

Last month, the ACT passed legislation legalising small quantities of cannabis for personal use; which may also be of some assistance to medicinal cannabis users. The legislation is due to kick in on January 31 next year.

But the Federal Government isn’t happy. Earlier this month, Australia’s Deputy Prime Minister Michael McCormack called the decision “dopey” and said Attorney-General Christian Porter (picture on the right above) was investigating ways to overturn the decision.

Last week, ACT Attorney-General Gordon Ramsay (pictured left above) warned the Federal AG against any such action and wrote to Mr. Porter, defending the ACT’s decision.

“The Act has been passed by the ACT Legislative Assembly as a self-governing body with the authority to make laws for people of the ACT,” says Mr. Ramsay.

But that hasn’t satisfied the Federal AG. According to a recent ABC Insiders interview with Attorney-General Porter, he wrote back to his ACT counterpart on the weekend challenging the validity of the law.

“The ACT laws removed the criminal component at a Territory level, but didn’t establish anything that is a positive right to possess, which means there’s no defence to the Commonwealth law that criminalises amounts under 50 grams,” said Attorney-General Porter. “So my advice, and the advice that I’ve provided to the ACT Attorney-General is that it is still against the law of the Commonwealth to possess cannabis in the ACT.”

Should this battle continue past January 31, it’s likely going to create headaches for police in the Territory as AG Porter expects ACT Policing to enforce ACT *and* Commonwealth drug laws.

Currently in the ACT, penalties for possessing up to 50 grams of dried cannabis, or two cannabis plants (excluding hydroponically or artificially cultivated  plants), for personal use involves a small fine. If the fine is paid within 60 days, no criminal record is recorded.

Previous article
Hemp Thefts Skyrocket In The USA
Next article
USDA: Hemp Rules “A Couple Of Weeks” Away
Steven Gothrinet
Steven Gothrinet has been part of the Hemp Gazette in-house reporting team since 2015. Steven's broad interest in cannabis was initially fueled by the realisation of industrial hemp's versatility across multiple sectors. You can contact Steve here.
RELATED ARTICLES
News